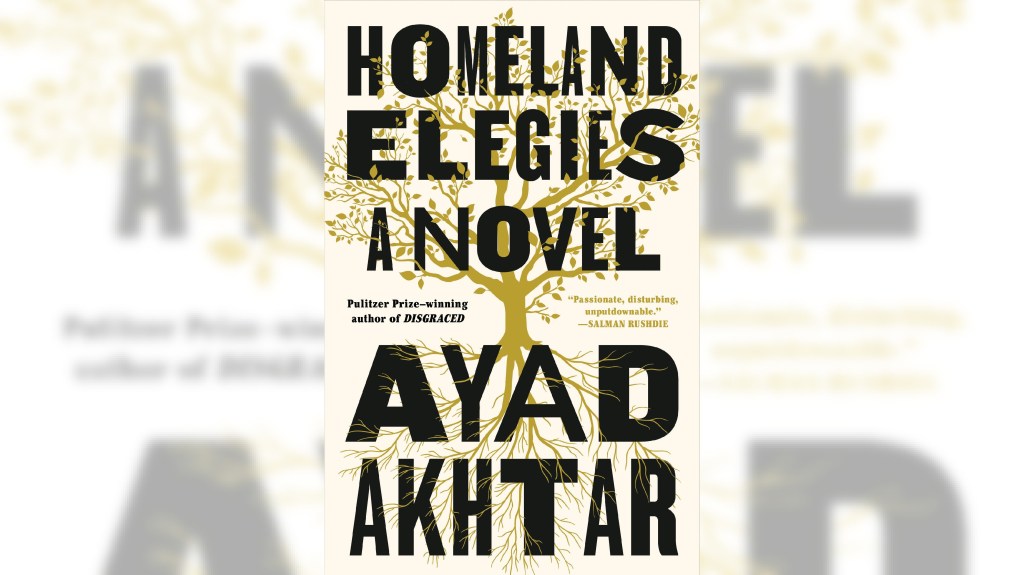 An elegy is a mournful poem expressing regret for something lost. Ayad Akhtar’s brilliant new novel, “Homeland Elegies,” mourns an America that has lost its way in the half-century since it welcomed his parents’ generation of Muslim immigrants from Pakistan.

It’s a work of autofiction narrated by a man named Ayad Akhtar who is best known, like the real Akhtar, for writing a hit Broadway play in which the lead character, a Pakistani American lawyer, expresses some sympathy for the terrorists who blew up the World Trade Center.

At various points of the book, you may be tempted to go online to see if they’re really true. But as you get swept up in the sprawling story, you begin to realize that the Akhtar of the book is a blend of many voices and characters, real and imagined, from Walt Whitman and Allen Ginsberg to Alexander Portnoy, who struggled with his Jewish identity some 50 years ago in “Portnoy’s Complaint” in the same self-lacerating way that Akhtar does with his Muslim heritage.

Moving back and forth in time, the fictional Akhtar describes growing up in Wisconsin, going east to college, visiting Pakistan to see relatives and friends. Both his parents are doctors; their fellow immigrants are well-educated, too. All have their own complex views about being Muslim in America.

His father is a patriot; his mother, not so much. One of many vividly drawn secondary characters, she makes the aromatic Lahori hoof stew of her homeland, yet loves David Letterman and polka. His Auntie Asma, a college professor who encourages his literary aspirations, tells him she adored Salman Rushdie’s “Midnight’s Children” but hated his “The Satanic Verses” for its “sickening” attacks on the Prophet Muhammad. “I mean, this is what we have to expect? From Salman? From one of us?” she fumes one night over an expensive bottle of wine in a swanky restaurant.

Then there’s Uncle Shafat, victim of a hate crime, who doesn’t feel safe in America until he converts to Christianity and marries a white woman. And a childhood friend, Ramla, who is forced to wear a hijab but knows all the words to “Thriller.”

Before the book was published, the real Ayad Akhtar — recently named the new president of PEN America — said he wrote it in “a fever dream” after his mother died, Donald Trump was elected, and his father started showing signs of decline.

He wanted to remember what brought his parents’ generation to the United States, how the country changed, and what those changes meant for all of them. The result is a searingly honest, brutally funny, sometimes painful-to-read account of being a Muslim in America before and after 9/11.