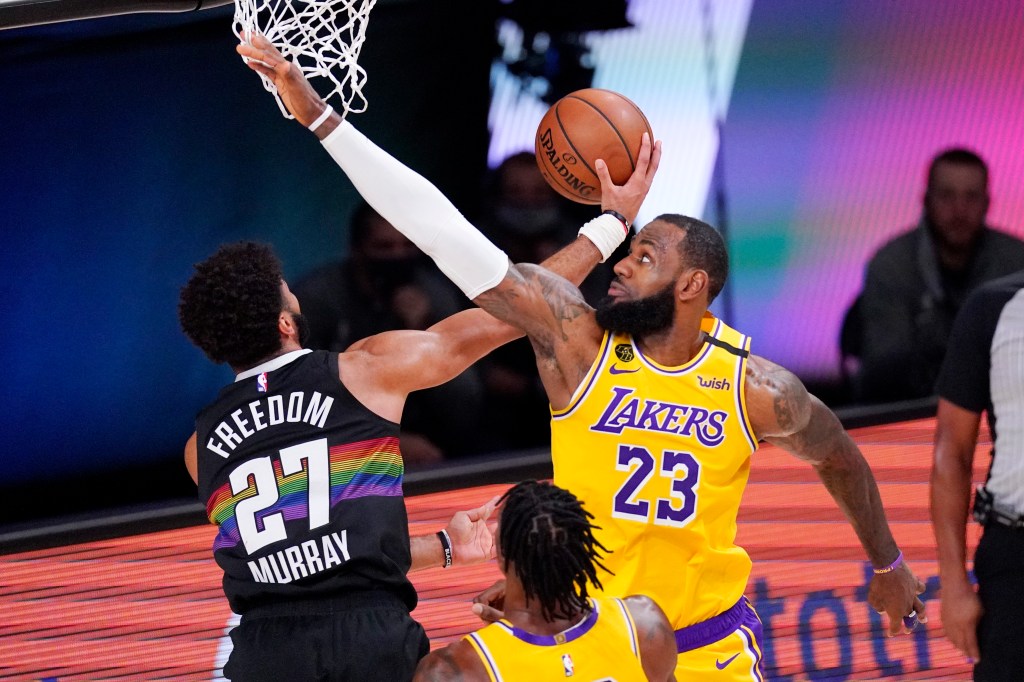 LAKE BUENA VISTA, Fla. >> However these Western Conference Finals turn out, observers will agree on at least one thing: Jamal Murray has raised his game.

The fourth-year guard is the highest draft pick on the Denver Nuggets’ roster, landed at No. 7 in 2016. At the time, Nuggets coach Michael Malone thought he was a steal even so. And now as he averages 26.6 points, 6.5 assists while shooting better than 47 percent from three in 17 playoff games, he’s outshone a lot of even what Malone could have expected.

“I would actually say – this is no disrespect to Jamal – but I think he’s gone from a very good player,” Malone said. “I think he was a very good player coming into this whole thing. And now on this stage has showed himself to be a great player, a superstar.”

It’s just the second year of playoffs for Murray, who has escalated his reputation into a higher echelon of NBA scorers after averaging 18.5 points and 34.6 percent shooting on 3-pointers in the regular season. Malone said what’s made him happiest is how Murray has played defense.

Still, he tried to hold superstar comparisons at bay.

“I know a lot of people are trying to compare Jamal to Steph Curry, similar career path in the playoffs,” he said. “I think it’s unfair to Steph Curry, an MVP winner. And I think it is very unfair to Jamal Murray. Let Steph be Steph and Jamal be Jamal.”

He unleashed a storm of tweets the night before, but on Thursday night, LeBron James made it known how he felt without saying a word.

A day after just three charges of wanton endangerment for former Louisville police officer Brett Hankinson and no other charges for officers involved in the shooting death of Breonna Taylor, James wrote her name on the side of his shoes.

It was a tough announcement for many players in the NBA to hear after spending the last two-and-half months calling for justice in the case of the 26-year-old EMT. Several players joined a call with members of Taylor’s family, and others reached out to the office of Kentucky attorney general Daniel Cameron during their time on the Disney campus.

After Wednesday’s practice, the Lakers hadn’t had much time to process the news, which Danny Green and Alex Caruso described as “disappointing.”

“It’s clear that this news has hit our guys very hard. It’s heartbreaking, and you know, there’s really no silver lining to it. It’s a reminder of, it’s not just — it’s hard for Breonna Taylor, her family, and everybody that was invested in this,” Frank Vogel said. “But it’s just a reminder of all the other acquittals when unarmed black men are being killed, and it’s just something that’s hit us hard.”

Vogel said he’s become “more invested” in the last few months since the death of George Floyd that hit a national nerve and sparked widespread peaceful protests and calls for changing institutions imbued with systemic racism.

Malone agreed that the charges had been met with frustration by his team. Notably Murray had worn shoes with Taylor’s likeness on them, and after winning a first-round series against Utah, said: “We found something worth fighting for.”

But the stubborn fact remains that few officers involved in high-profile shootings of Black people have ever been prosecuted, which Malone said was also something his players understood.

“I don’t think our players are surprised, nor are most people surprised at the verdict (sic),” he said. “But, yeah, there’s disappointment, there’s frustration. You balance that out with the task at hand, which is to try to even up this series in the Western Conference Finals.”