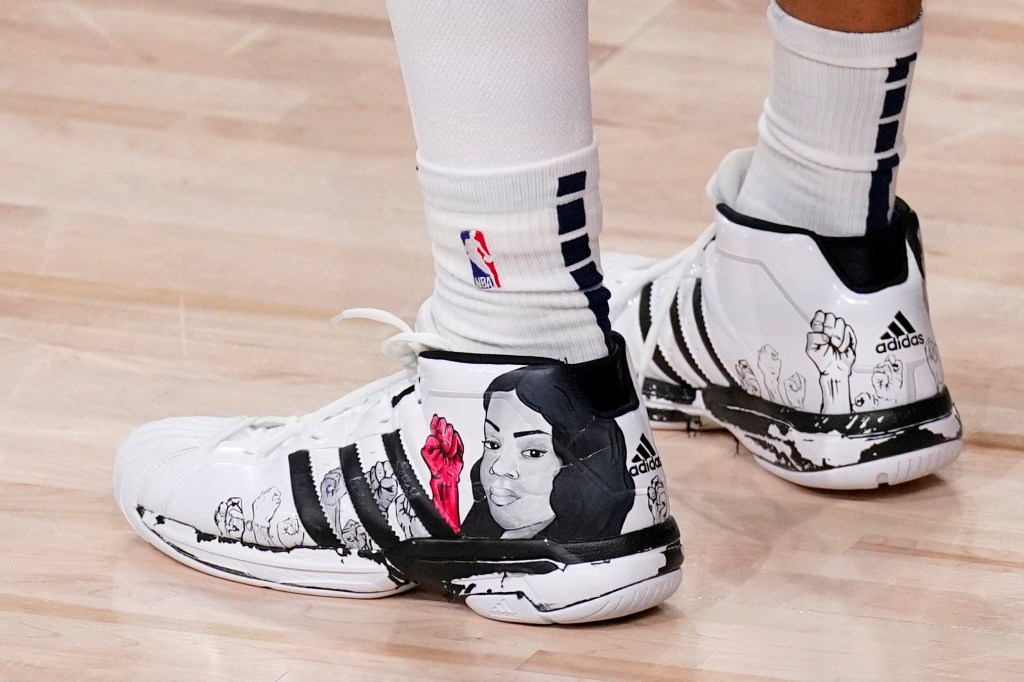 The news Wednesday that a Kentucky grand jury decided to indict only a former police officer for shooting into neighboring apartments and not bring charges against any officers for their roles in Breonna Taylor’s death resulted in sweeping expressions of frustration – from the streets of Louisville to the NBA bubble.

There, the Lakers and Nuggets learned of the jury’s decision on their way to practice before Game 4 of the Western Conference Finals on Thursday.

“What happened today wasn’t enough,” Lakers guard Danny Green told reporters in response to the news that only fired Officer Brett Hankison will face three counts of wanton endangerment in connection to the police raid of Taylor’s home on the night of March 13.

“… prayers out to her family. We’re still thinking of them, we’re still seeking justice for them as well as many others, and hopefully this is a step – it’s a step, but we need a lot more progress made than what has been today.”

“I know we’ve been using our platform down here to try to bring about education and a voice in a lot of players on our team, especially also spoken out on justice for Breonna Taylor,” Malone said, via Zoom video conference. “We have not gotten that justice. That’s a shame. Hopefully that will change at some point.”

“Sadly, there was no justice today for Breonna Taylor,” Roberts said. “Her killing was the result of a string of callous and careless decisions made with a lack of regard for humanity, ultimately resulting in the death of an innocent and beautiful woman with her entire life ahead of her.  Our players and I once again extend our deepest sympathies to her family and we vow to continue working in her honor and to always say her name.”

In their continuing advocacy for social justice and police reform, NBA and WNBA players have been outspoken in recent months about their desire to see harsh penalties for those involved in the death of Taylor, a 26-year-old Black emergency medical worker who was shot five times when Louisville police officers executed a no-knock search warrant at her apartment. The warrant used to search her home was tied to a suspect who did not live there and wasn’t on the premises. No drugs were found.

Taylor’s mother, Tamika Palmer, has said she appreciates the support she and her family have received from players in both leagues as the six-month-long investigation into her daughter’s death wound on.

Palmer previously was involved in Zoom calls with NBA and WNBA players, discussing how they could best use their platform to fight for justice in the Taylor case.

Last month, following the police shooting of Jacob Blake in Kenosha, Wisconsin, NBA play stopped outright when, in protest, the Milwaukee Bucks refused to take the court for their playoff game against the Orlando Magic, spurring a bubble-wide strike. WNBA players followed suit in their bubble, taking off two days for what L.A. Sparks forward and players union president Nneka Ogwumike deemed a “moment of reflection.”

Green suggested the jury’s decision in the Taylor case will inspire the four NBA teams still playing to continue to find ways to advocate about social justice.

“Obviously, basketball is a small part of the bigger picture of what we’re doing here,” Green said. “But hopefully we can continue to compete and make it to the next stage that we have still here to discuss it. Just got to take advantage of the days that we have and the time that we have that we’re here together and use the platforms that we have to our advantage.

“I think we’re being heard,” he added, “but obviously the goals that we’re trying to achieve, we’re very far away from after seeing today’s verdict. It’s a disappointment. We feel like we’ve taken a step back, that we haven’t made the progress we were seeking. Our voices aren’t being heard loud enough.

“… seems like every time we turn around and look at the news, it’s always something disheartening or disappointing, and that’s from all standpoints of what’s going on in our country. We’re not happy about it, but can’t give up hope, can’t quit, got to keep fighting and try to make things better, not just for us but for our future children, future grandkids. We want it to be a better place here for them to live.”

I asked Danny Green if he felt like the social justice mission of the bubble was working. Acknowledging that the Breonna Taylor news is disheartening and that true change is far away, Green said: “Our voices are not being heard loud enough. But we’re not gonna stop.” pic.twitter.com/pUo91XlxfR

Players outside of the bubbles also shared their dismay at the jury’s decision.

Clippers big man Montrezl Harrell tweeted a photo of himself – in which he’s posing with his Sixth Man of the Year award and a pair of sneakers depicting Taylor’s name and image – along with messages supporting Louisville residents. Harrell played college basketball in the city, where this week Mayor Greg Fischer declared a state of emergency this week in anticipation of possible “civil unrest” and, on Wednesday, enacted a three-night curfew from 9 p.m. to 6:30 a.m.

“I lived in the VILLE for three years of my life and it became another home to me, but wow what’s happen?” Harrell tweeted. “These are the charges you actually come up with? Nothing to say but WOW SPEECHLESS!”

Utah’s Donovan Mitchell – another former Louisville player, who wore “Say Her Name” on the back of his jersey in the bubble in honor of Taylor – tweeted: “I don’t have many words right now…. but all I can say is I’m praying for the city of Louisville right now!!!”

Since Taylor’s death, the use of no-knock warrants has been banned by Louisville’s Metro Council. And on Sept. 15, following months of protests that turned Taylor into a national symbol against police violence, city officials agreed to pay her family $12 million and institute changes aimed at preventing future deaths by officers.

In another, Crawford wrote: “In every way, they try and remind us Black lives don’t matter. We will ALWAYS matter!!!!!

This season, WNBA players made Taylor a cornerstone of their social justice campaigns, honoring her by wearing her name on the backs of every jersey.

San Bernardino native Layshia Clarendon, a New York Liberty guard who’s a leading voice in the women’s game on social justice issues, took to Twitter to reiterate her belief that the legal system is flawed.

“This is why police need to be defunded and ultimately abolished!” Clarendon wrote. “We time and time again hope for a sliver of justice but why would we get that when the system is designed to protect the very folks that are murdering and terrorizing us. This isn’t a bad apple, it’s a rotten tree.”

Although he and his Lakers teammates still were getting up to speed on all the details of Wednesday’s development, guard Alex Caruso said he knew enough to know that those who’ve been advocating for justice for Taylor would not be satisfied.

“Obviously,” Caruso said, “the results of what happened is not significant enough, not harsh enough in the eyes of people that are fighting for justice for Breonna Taylor.”

On a question from @MarcJSpears, Alex Caruso says he remembers how hopeful Breonna Taylor’s mother seemed on a video conference call with players earlier in the bubble, and he tried to put himself in her shoes. pic.twitter.com/GhanYQ6YXL