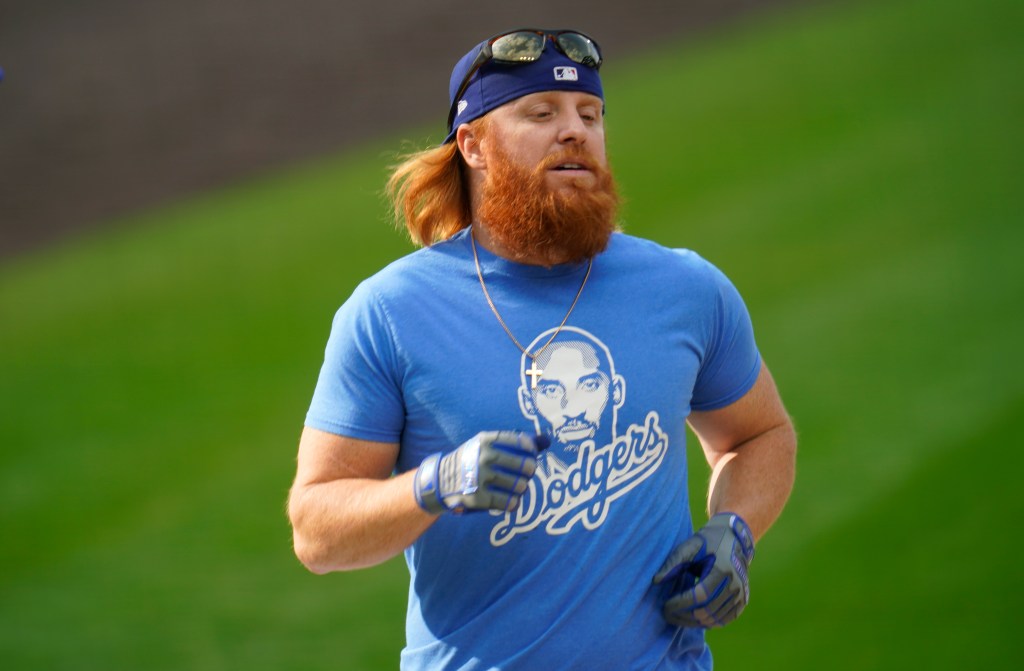 LOS ANGELES — Justin Turner returned to the Dodgers’ lineup a week ago. His return to third base will have to wait a little longer.

Turner was a last-minute scratch from the Dodgers’ lineup Tuesday against the Oakland A’s with left hamstring discomfort.

“There was just a cramp in his hamstring,” Dodgers manager Dave Roberts said. “As he went through his pregame, he felt good then something kind of tightened up. As I understand it, I just talked to Justin briefly a few minutes ago and he says he wants to be in there tomorrow. I’ll have to see how his hamstring responds tomorrow. But when the player says he wants to be in there, that’s a good thing.”

Turner missed 14 games with a strained left hamstring suffered during the Dodgers’ series in Texas in late August. He returned last week to play five games as the DH, going 7 for 18 (.389). He was scheduled Tuesday to make his first start at third base since Aug. 28 though Roberts said it would not be for the full nine innings.

Making Turner a full-time DH could be one way to guard against more hamstring problems, but Roberts said that is “not the plan” at this point.

“I think if ultimately that’s what it comes to certainly we’ll take his bat,” Roberts said. “But I think the goal is to get him out there playing defense for us.

“We’ll see how he feels tomorrow.”

Joc Pederson returned to the Dodgers’ lineup and started at DH on Tuesday after being activated from the family emergency leave list. The Dodgers have not given any specifics about Pederson’s situation and he has not been available to the media.

When asked if Pederson’s family situation had been resolved, Roberts said he couldn’t say “with 100 percent certainty” that Pederson would not have to leave the team again. Players on playoff-bound teams are supposed to begin quarantining this week in anticipation of playing in a “bubble” situation during the postseason.

Roberts indicated it is possible Pederson would be with the Dodgers through the Wild Card Series but not travel with them to Texas for subsequent rounds if the team advances.

“Family first. Joc knows that. His family understands that,” Roberts said. “I just know Joc worked real hard to be here with us to finish out this homestand. And I would expect him to be with us through the Wild Card Series. But after that, I just don’t know.”

Pederson also missed three games earlier this month on paternity leave and has gone just 2 for 24 this month. Roberts said Pederson has been taking at-bats in simulated-game settings over the past few days.

“It hasn’t been the season that he expected, that we expected out of him,” Roberts said of Pederson who was batting .174 with a .644 OPS when he returned Tuesday.

Through the first 54 games of their regionalized schedule this season, the Dodgers faced just one team that went into Tuesday with a winning record this season — the San Diego Padres. The series against the A’s made it at least two.

Other than their 10 games against the Padres, the Dodgers’ opponents had a winning record when they played just three other times. The Houston Astros were 3-1 to start the two-game series against the Dodgers in July and the Colorado Rockies were 13-12 before they lost to the Dodgers on August 21.

“We’ve always focused on us and how we play. Regardless of who we’ve played before, I’ll take us against any team going forward in the postseason.”

Right-hander Walker Buehler threw a bullpen session before Tuesday’s game. He is on track to come off the injured list and start Thursday against the A’s in a final tuneup before the postseason.