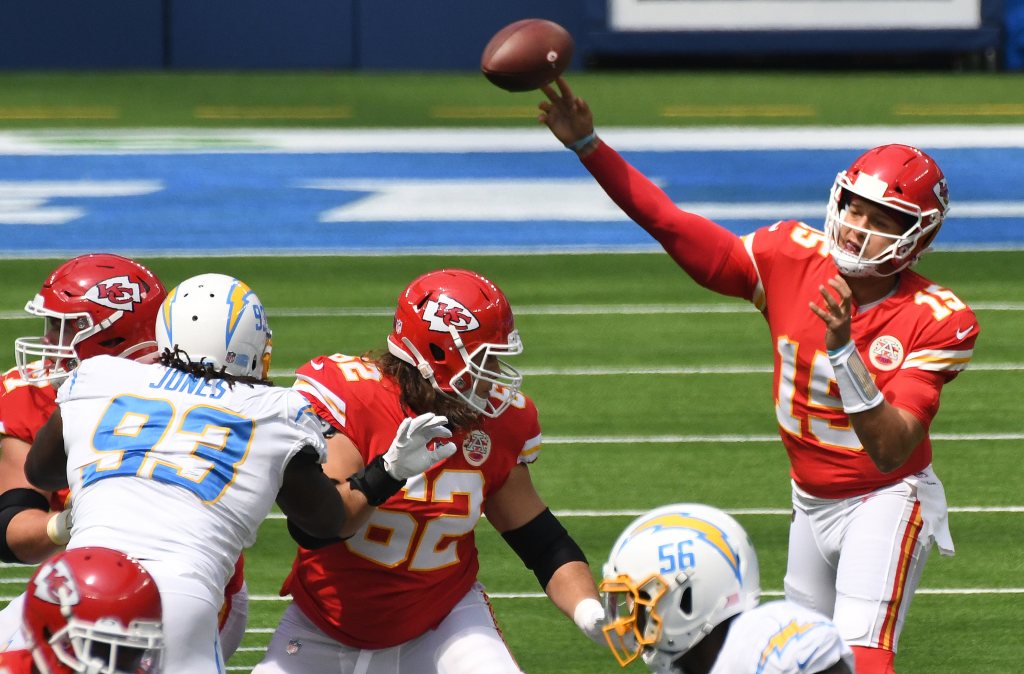 If something happens to Tyrod Taylor, Herbert would play, Lynn said days before the 2020 season opened.

Well, that something happened Sunday, and Herbert made his surprising debut against the Kansas City Chiefs in front of an empty SoFi Stadium.

The scoreboard also held a surprising score for nearly four quarters, but normalcy returned when the defending Super Bowl champions prevailed in overtime, 23-20. Chiefs kicker Harrison Butker made the game-winning 58-yard field goal in overtime. The Chargers dropped to 1-1.

Herbert finished 22 of 33 for 311 passing yards, one touchdown and one rushing touchdown.

Herbert trotted onto the field for the opening drive while Taylor stood on the sidelines with his hands on his hips. Taylor’s chest injury paved the way for Herbert to see the field in Week 2, which featured plenty of good and some bad for the No. 6 overall pick.

But this wasn’t Patrick Mahomes’ first game. The Chiefs’ star quarterback, like he’s done many times before, ignited a rally and got his team into overtime after Harrison Butker made a 30-yard field goal as time expired in the fourth quarter. The Chiefs trailed 17-6 in the third quarter.

The Chiefs capitalized on a Herbert interception after Mahomes found Tyreek Hill for a 54-yard touchdown pass. The Chiefs made a 2-point conversion and tied it 17-17 with 12:48 left in regulation.

Herbert bounced back on the following drive to put the Chargers near the goal line, but had to settle for a 23-yard field goal from Michael Badgley to retake the lead 20-17 with 2:27 left.

Herbert started his career by orchestrating an eight-play, 79-yard opening drive that ended with a 4-yard rushing touchdown from him. The rookie gained momentum after connecting on a 35-yard pass to rookie running back Joshua Kelley.

In the first half, Herbert worked best on quick screen throws, but missed throws downfield, including one in the end zone to Mike Williams.

But Herbert didn’t miss when he saw an open Jalen Guyton in the corner of the left end zone for a 14-yard touchdown pass and a 14-6 lead for the Chargers in the second quarter. Herbert wasn’t phased by the Chiefs’ pocket pressure and waited for the play to develop before releasing the fade pass.

Mahomes had a rough start to open the game because of the Chargers’ constant pressure from the defensive line. The Chiefs’ only points in the first half came from a 10-yard touchdown pass from Mahomes to tight end Travis Kelce. Chargers defensive tackle Jerry Tillery blocked the extra-point attempt.

Chargers star pass rusher Joey Bosa entered the game with 41 career sacks, but none on Mahomes. That changed when Bosa pinned Mahomes in the third quarter for a loss of 13 yards.

Check back soon for updates