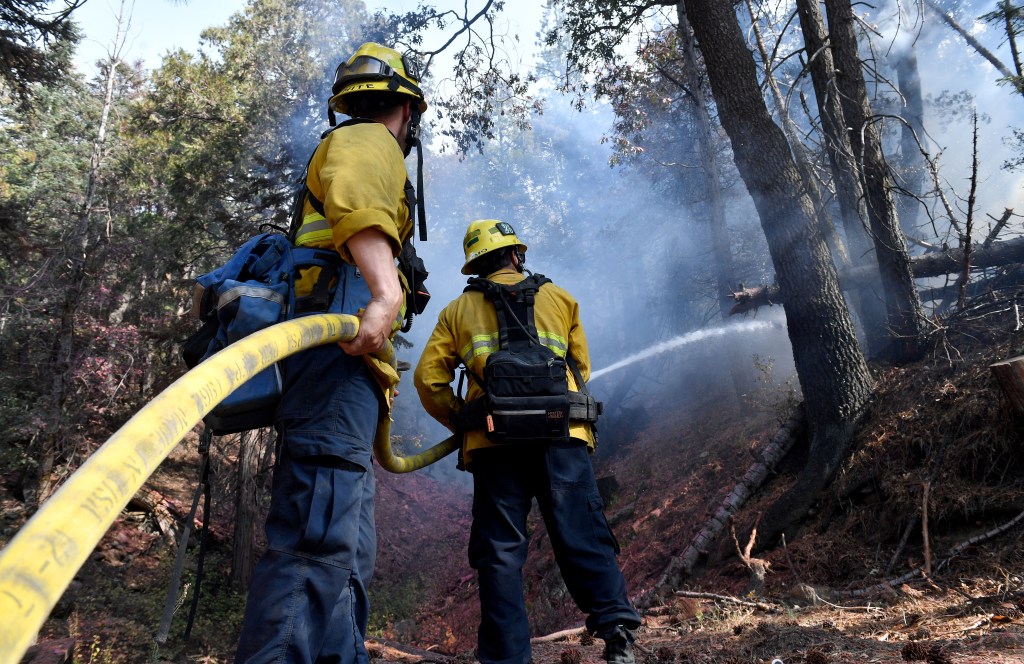 The fire’s footprint was at 22,489 acres and containment remained at 59% containment Sunday morning. Containment is when firefighters create and hold a fire break around the perimeter of a wildfire.

The fire’s most active area continued to be near the community of Angelus Oaks and along Highway 38. Over the weekend firefighters set controlled blazes to blunt the advance of the fire.

Concern continues about spot fires breaking out past the fire lines, especially from rollouts, in which downed, burning trees head into unburned brush, grass or timber.

Temperatures were expected to reach 90 degrees below the 6,000-foot level in the San Bernardino Mountains on Sunday, with southerly winds gusting to 25 mph in the afternoon, the National Weather Service said.

El Dorado fire evacuation orders are in effect from Angelus Oaks up to Onyx Summit.  Residents have been allowed to return to Mountain Home Village and Forest Falls, but remain under an evacuation warning.

No evacuation warnings or orders have currently been issued for Big Bear Valley communities. Fire authorities urged residents to monitor official sources for any changes.

Highway 38 is closed between Bryant Street. and Lake Williams Drive, although Mountain Home Village and Forest Falls residents will be allowed through the Bryant Street Checkpoint. The highway remains closed above Valley of the Falls Drive.

Forest Falls residents were told Saturday that their mail was being shipped back to their community post office, which will open for regular hours on Monday; packages may take longer to reach it.