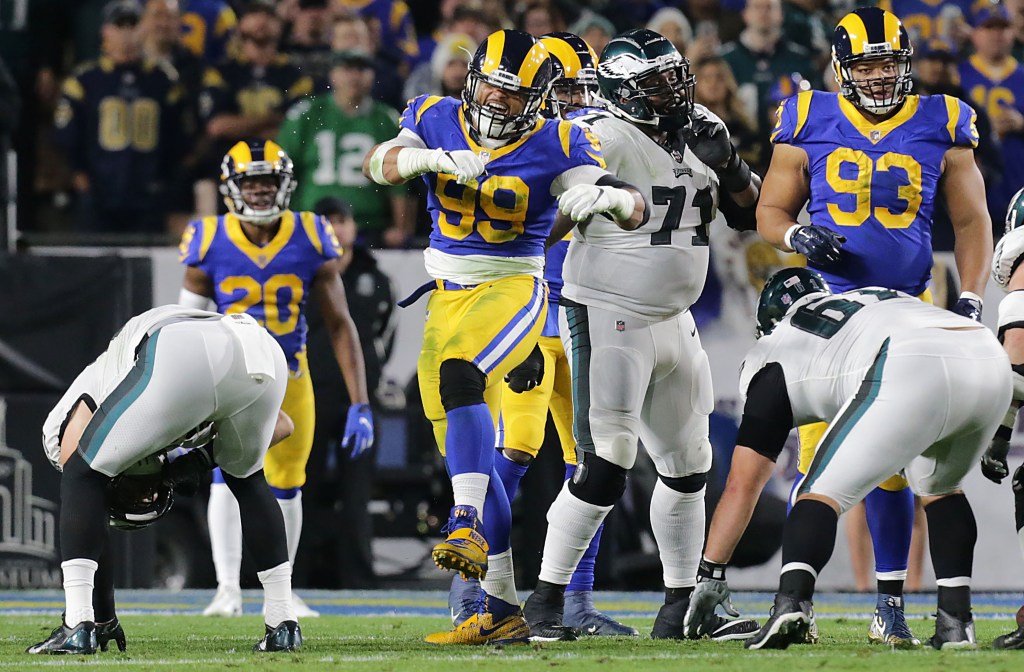 What’s at stake?: A Rams victory would make them 2-0 to start their tough three-game September stretch (Dallas, at Philadelphia, at Buffalo) and force some reevaluation of a team that began the season widely seen as not quite good enough to make the playoffs in the strong conference and division. For the Eagles, it’s a lot of that in reverse.

Who’s better?: Safest answer is: On what day? Both teams must shake off last year’s frustrating inconsistency. Both went 9-7, but the Rams did it in the NFL’s toughest division, the Eagles in the softest. The Rams are counting on young players to make up for big offseason losses, especially on defense, while the Eagles made more veteran additions.

Rams win if …:  If they get a second good game from young players like LBs Micah Kiser and Kenny Young and S Jordan Fuller on the defensive side. If they contain Eagles TEs Zach Ertz and Dallas Goedert, and DT Aaron Donald feasts on Eagles QB Carson Wentz, sacked eight times by Washington. If QB Jared Goff leads the offense to touchdowns, not field goals.

Matchup to watch: Rams WR Cooper Kupp vs. Eagles CB Nickell Robey-Coleman. The slot receiver and slot cornerback worked against each other in practice for three years in L.A. Now that Robey-Coleman is in Philly, he said he isn’t being shy about sharing Rams offensive tendencies with his new teammates, telling them not to be distracted by all of those pre-snap shifts.

Fantasy sleeper: Van Jefferson shows signs of at least pulling even with third wide-receiver option Josh Reynolds. The rookie was targeted by Goff three times (one catch for 31 yards) to Reynolds’ once (a catch for 17 yards) against the Cowboys last Sunday.

Prediction: Eagles 24, Rams 23. In Las Vegas, where the line swung from Eagles to Rams and back this week, they see the Eagles winning 23-22 (the over-under line was 45 1/2 at midday Saturday). We’ll go with Philadelphia and the over, thinking the Rams won’t get the rub of the green on coaches’ and refs’ decisions as they did last Sunday on their new home field.