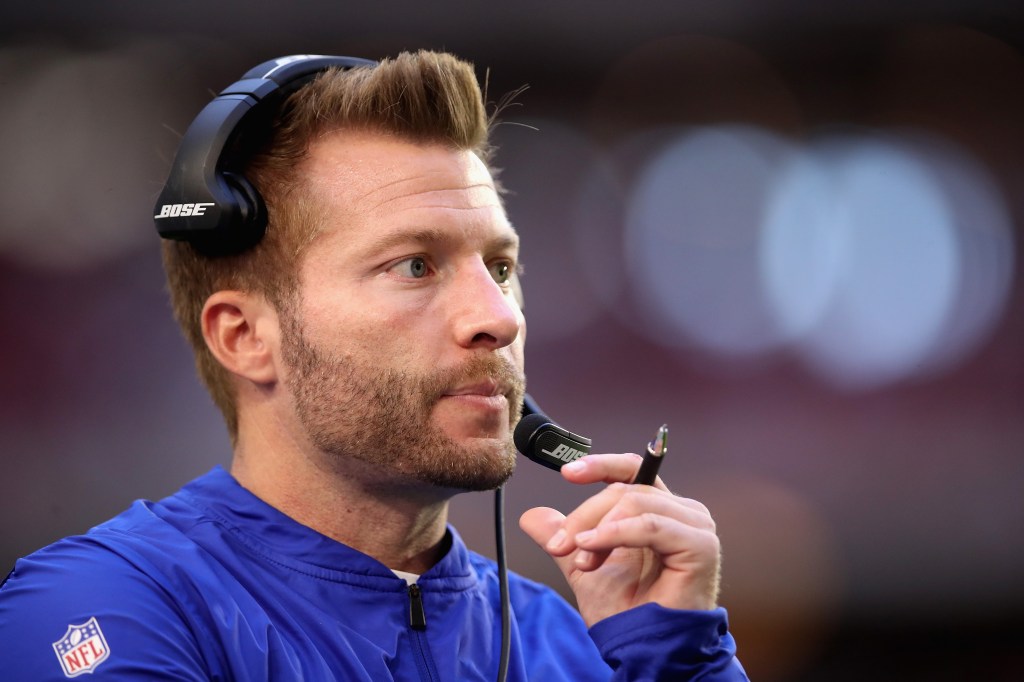 Sometime Monday in Thousand Oaks, in a newly erected tent roomy enough to allow social distancing by 100 football players and coaches, Sean McVay will meet his 2020 Rams face to face for the first time.

McVay can’t come right out and say it’s going to his most challenging camp as a head coach, and maybe it’s not. It wasn’t easy in 2017, when McVay was a 31-year-old rookie coach. That worked out all right.

“I know our players and coaches are really champing at the bit to even get in here, where we can meet with the players in person,” McVay said in a video chat with reporters Sunday from the Rams’ facility at California Lutheran University. “It’ll be newer challenges, things we’ve never navigated before.”

None of the 32 NFL coaches has ever faced a training camp as hard as this, with practice sessions limited, preseason games and inter-team scrimmages eliminated, and daily coronavirus tests reminding everybody why.

It might be harder for McVay. Nobody will have to work around those restrictions to incorporate more changes in the roster and staff than he must carry out after a 9-7, non-playoff season followed by a rough offseason.

All told, the team will have at least six different starters from the 22 on the depth chart for the Rams’ last game of 2019, and at least nine changes from the 22 who began last season.

The assistant coaches helping McVay choose the starters for the Sept. 13 season opener against the Dallas Cowboys at SoFi Stadium are new, too: coordinators Kevin O’Connell on offense, Brandon Staley on defense and John Bonamego on special teams, and running backs coach Thomas Brown.

To evaluate players in game conditions without the usual four exhibitions and joint practices with other teams, McVay said Sunday he plans to hold intrasquad scrimmages at SoFi, the new Rams and Chargers home in Inglewood.

He hopes that while the lack of audition time might hinder rookies, an increase in “above the neck” coaching early in the pandemic-style training camp will help them.

“If we do it the right way,” McVay said, “it’ll give rookies actually a better opportunity to not be as stressed and overwhelmed mentally when the full-speed reps start.”

Camp will begin with a nine-day “acclimation period” of weight and on-field conditioning work, followed by a five-day “ramp-up” period of practices. Not until Aug. 18 will a 20-day period of full-contact practice begin on two fields in Thousand Oaks. (Fans won’t be allowed at training camp this year, and reporters won’t be allowed in until Aug. 18.)

The Rams begin camp with the 2020 limit of 80 players (10 fewer than usual) on the roster after undrafted rookie defensive tackle Michael Hoecht was activated Sunday from the “Reserve/COVID-19” list for players who tested positive for the coronavirus or have been quarantined because they were in contact with an infected person. The active roster must be trimmed by Sept. 5 to 53, plus a practice squad of 16 (six more than usual).

Hoecht and Lewis were put on the Reserve/COVID-19 list Friday, the same day that offensive lineman Chandler Brewer declared he was opting out of playing this season because his 2018 battle with non-Hodgkin’s lymphoma leaves him at risk to the virus. McVay said he didn’t expect any other players to opt out or go on the physically unable to perform list.

Once openly skeptical about holding training camps, McVay said he feels “a lot better” now because of the NFL’s agreement with the NFL Players Association to hold daily virus testing for the first two weeks.

McVay preached “responsibility” by players and other personnel, who will commute to camp from their homes, to keep the virus from entering the training-camp “ecosystem.”

“It’s not just about what you’re doing here (in camp). It’s about understanding how important the ramifications can be if you make bad decisions outside of here with who you’re exposed to,” the coach said.

But he said he won’t impose rules for players’ off-duty behavior or special treatment for indispensable players such as quarterback Jared Goff.

“What I’m still working through is that fine line of acknowledging how serious this … but also allowing(ing) us to go play football.”